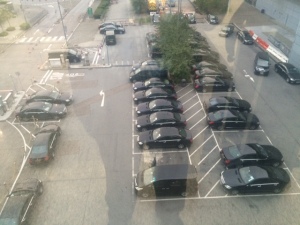 Kenya has witnessed an exponential rise in all types of vehicles. Scientists have expressed concerns from the negative effects of air pollution. Scientifically it has been confirmed that vehicles are responsible for increased air pollution due to emission of the following gases.

Ozone is formed when nitrogen oxides and volatile organic compounds (hydrocarbons) mix in sunlight. The source of Nitrogen oxides is mainly burning gasoline, coal, or other fossil fuels. Ozone gas can be found in two places namely near the ground (the troposphere) and in the upper atmosphere (stratosphere). Ozone in lower atmosphere forms a major part of smog. Ozone near the ground has been blamed for health complications such as asthma attacks, sore throats, coughs, and breathing difficulty. This could lead lead to premature deaths. Ozone in upper atmosphere screens out harmful ultraviolet rays.

Carbon monoxide gas is produced through burning of fossil fuels mostly in automobiles. This happens mostly when the fuel is not completely burnt possibly as a result of engines not being tuned properly. Increase in carbon monoxide in the atmosphere could be fatal since it reduces the ability of the red blood cells to carry oxygen to the cells. This could lead to death.

Nitrogen dioxide is generated from the burning of fossil fuels mostly from power plants and cars. It could also be formed when nitrogen in the air reacts with oxygen at very high temperatures for instance during lightning strikes.

Nitrogen dioxide reacts with water vapour and other substances in the atmosphere to form acid rain which can harm plants and animals.

Particulate matter in the atmosphere could occur in form of solid or liquid matter suspended in the air. These particles are normally less than 0.1-mm wide. There are two types of particulate matter
a. Coarse particles emanate from road dust, construction dust and sea spray among others.
b. Fine particles are formed when fuel is burned in automobiles and power plants.

As the particles become smaller in size, their possibility to be breathed into our lungs also increases. These particles settle in the lungs and damage them causing health problems such as asthma attacks, respiratory problems, and premature death.

Sulphur dioxide is a corrosive gas that is released from fossil fuels in power plants as well as fuel combustion in mobile sources such as locomotives, ships, and other equipment. Other sources of this gas include factories that make chemicals, paper, or fuel.

Sulphur dioxide easily dissolves in wet surfaces of our body causing irritation of people’s eyes, noses, and throats. People with asthma or emphysema are at higher risk from sulphur dioxide gas.

Carbon dioxide is released from burning of fossil fuels in cars, power plants, houses, and industry. This gas is the most important greenhouse gas which is responsible for climate change.

Vehicles emit toxic air laden with pollutants such as Benzene, acetaldehyde, and 1,3-butadiene. These toxins are known to cause cancer, birth defects and other serious illnesses.

The information above shows that as the number of vehicles increase, there is a likelihood of increase in fatalities due to air pollution. The urban community would be more affected since that is where more vehicles are concentrated.